What We Learned While Visiting the Churches of Sts. Prassedes and Pudentiana

Last May we blogged about the sister saints, Praxedes and Pudentiana, daughters of St. Pudens, a Roman senator converted by and baptized by St. Paul and shared information that we learned through our research for crafting the itinerary of our pilgrimage, “Women Saints Through the Centuries.”  Click HERE to read the prior blog post.

This past October, we and members of our pilgrim family met in Rome and embarked on the inaugural pilgrimage of Women Saints Through the Centuries. Once again, the Holy Spirit directed our paths for a chance encounter in the Church of St. Pudentiana.  We met a couple who travelled to Rome specifically to visit this church.  The wife share a book they used during the course of a bible study that contained two pages of information describing where Peter lived in Rome. [1] The information contained in those pages and what we learned from the caretaker of the church was quite astounding. 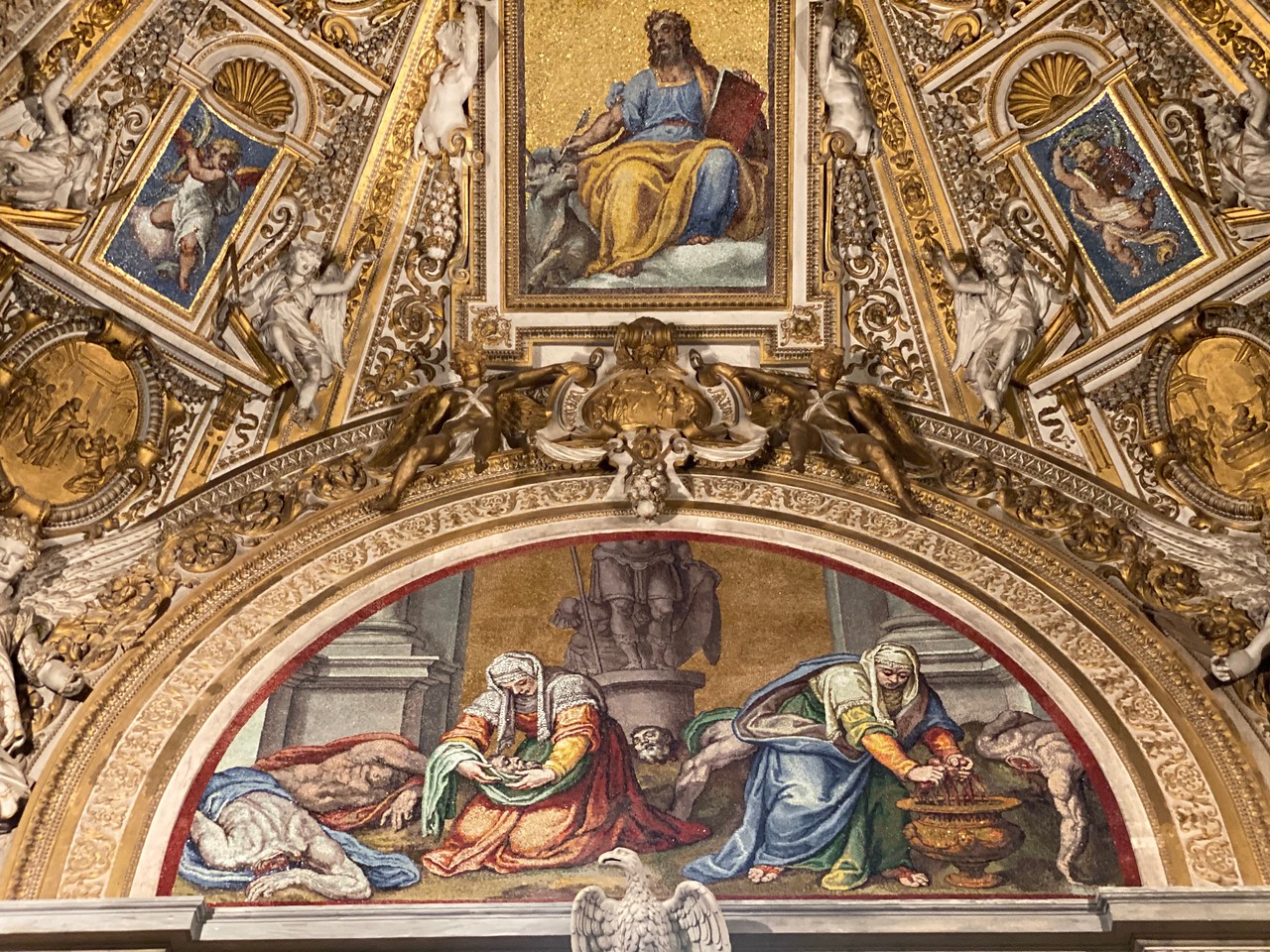 The book used for the bible study was Peter – Cornerstone of Catholicism, Session 10, Lectio by Tim Gray. This particular section of Session 10 begins with using Sacred Scripture to track St. Peter’s steps after he received the vision in Joppa and baptized Cornelius and his household.  St. Luke later records that Peter went from Judea to Casearea to escape arrest by Herod Agrippa.  The following is from Session 10:

It is at this point the Sacred Scripture and Sacred Tradition meet. Scripture tells us that Herod Agrippa had the Apostle James martyred.  The date usually assigned to James’ martyrdom is c. 42.  Scripture also tells us that shortly after James’ martyrdom, Herod had Peter arrested. Peter’s miraculous escape from prison, his going from Judea to Caesarea, and his subsequent travel to Rome happened sometime mid-first century AD… it is likely that Cornelius assists Peter with his journey to Rome, sending letters of introduction to his friends and contacts there. [Peter, page 192]

One tradition suggests that, while in Rome, Peter was hosted by a Senator named Pudens.  See prior post for scripture quote from the book of the Second Letter to Timothy. 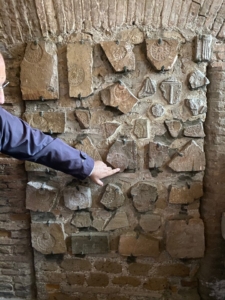 Today the Church of Pudentiana, named after Pudens’ daughter, is built over what is believed to be the house of Pudens.  In excavations at this site, a first-century brick was found with Pudens’ name impressed in the brick, the building custom of the time (photo left). The Church or St. Pudentiana is recognized as one of the oldest places of christian worship in Rome. The home, and later the church built over it, was the residence of the popes until Constantine became emperor and offered the Church the Lateran Palace (known today as the Basilica of St. John Lateran). 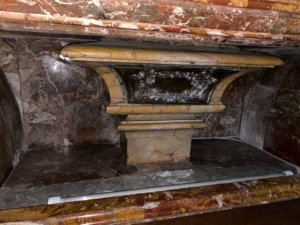 The Church of  St. Pudentiana has several wonderful relics and pieces of artwork.  One in particular is located in the side chapel to the back left of the apse. Under the altar in this back chapel is part of the table upon which St. Peter would have celebrated the Eucharist while residing in Pudens’ home (photo left). When the papal residence was moved to St. John Lateran, the table was split in two, with on part remaining at St. Pudentiana’s and the other part embedded in the papal altar in  St. John Lateran. 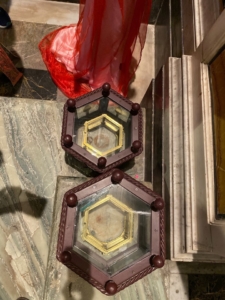 The Church of St. Pudentiana is also the site of a Eucharistic miracle. In 1610 AD a priest celebrating Mass was in doubt regarding the Real Presence of Christ in the Eucharist.  After consecration, he accidentally dropped a consecrated Host on the floor. The Host left an impression in the marble that can still be seen today (photo left). It seems fitting that the church over the site where Peter first celebrated the Eucharist in Rome would later be the site of a Eucharistic miracle. [Peter, page 193]

According to the caretaker at the church, it is believed that  St. Peter lived here for 7 years. In our previous blog post, we mentioned that the sisters, especially Praxedes (who survived her sister) collected the bodies of the early martyrs, cleaned their bodies and buried them in the Catacombs of  St. Priscilla.  It is believed that Praxedes would wipe the blood off the bodies and squeeze the martyrs’ blood out of the cloths and down a well.  The well is still on the site of the church grounds.

More photos from our visit to this sacred site will be available soon on our Facebook Page.

Resource regarding the Eucharistic Miracle including photographs, click HERE to go to RealPresence.org to access the list of Eucharistic Miracles compiled by the Venerable Carlo Acutis, a young boy who died at age 15. His remains are currently at the Shrine of Renunciation in Assisi.

For more information about the Women Saints Through the Centuries Pilgrimage for 2020 that includes a visit to the Churches of  St. Praxedes and Pudentiana, the Catacombs of St. Priscilla and a day trip to Assisi, click HERE.