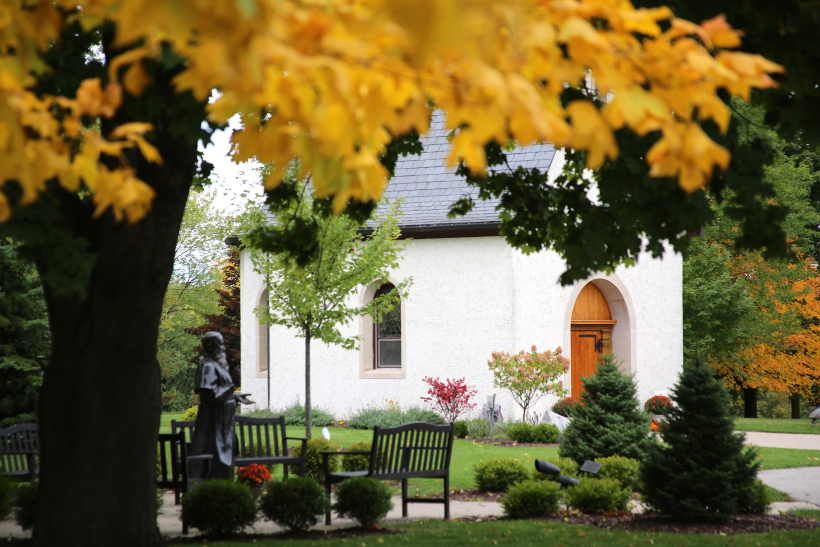 In October 2021, Inside the Vatican Pilgrimages hosted, for the first time, a spiritual journey within the United States, bringing pilgrims to Virginia for The Shenandoah Valley Experience.  This year, we will be offering our first-ever pilgrimage to Wisconsin: Discovering Mary in the Heartland during the glorious autumn days of September.  We hope that these extraordinary new pilgrimages will mark a renewal of authentic pilgrimage within the United States and offer an opportunity to encounter the riches of our Catholic heritage here in our own homeland.

Follow our blog to learn more about our upcoming pilgrimages in the United States.  In today and next week’s posts we will focus on Wisconsin and the unique culture of pilgrimage that has been growing in the Badger State over just this past decade.

The “Wisconsin Way” is reviving Catholic pilgrimage in the U.S.

Fr. Andrew Kurz, priest of the Diocese of Green Bay who coined the term “Wisconsin Way” for the pilgrimage route he organized there, remarks that “‘Vacation’ has become the ‘ape’ of pilgrimage – a cheap imitation” because it is aimed mostly at entertainment.  Little time or attention is left over for the most important pursuits, those that make us most human – like seeking God.  The classical meaning of “leisure” – the use of “non-work” time in the pursuit of the “higher things” – has been long forgotten.

But that is about to change, at least for a small group of souls who will depart this summer on a unique American pilgrimage to destinations along the “Wisconsin Way.” Among this surprising collection of Catholic spiritual sites are five national shrines, including shrines to St. Philomena, Our Lady of Guadalupe, and the Basilica of Our Lady, Help of Christians.

Pilgrims will get a glimpse into the monastic life of the East at the towering, historic Holy Resurrection Byzantine Catholic monastery, where the English-language liturgy is sprinkled at times with Greek, Romanian and Slavonic. “First and foremost is our ministry of prayer,” says Abbot Zachariadis, who is “father” to the nine monks living there, but hospitality “is a natural extension of our prayer life.”

Perhaps the most surprising of the Wisconsin pilgrimage sites is the National Shrine of Our Lady of Good Help, a shrine of the only Vatican-approved Marian apparition in the United States. Mary appeared here in 1859 to a young Belgian immigrant woman named Adele Brise, telling her to bring the Faith to the children of this “wild country.”

From September 2 to September 9, Inside the Vatican Pilgrimages will lead a group of pilgrims on this exciting foray into the wooded glens and majestic morains of Wisconsin, exploring sites along the “Wisconsin Way ” and other Catholic destinations in the state. Inside the Vatican editor-in-chief Robert Moynihan and COO Deborah Tomlinson will share the experience and expertise of 30 years on both sides of the Atlantic, living and working among Princes of the Church and Catholic faithful from all over the world…all seeking the face of Christ, led to him by His Mother, Mary.

Come with us this fall as together we discover Mary anew, in the heartland of the United States. Come with us as we help to forge a new but, we believe, enduring pilgrimage path to the Mother of Jesus.